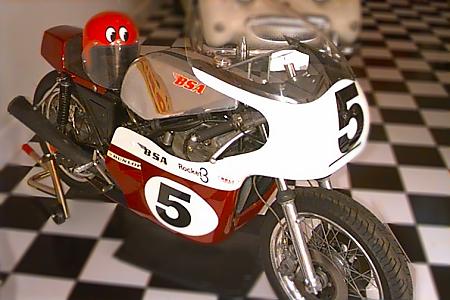 The racing version of the Rocket 3 triple road bike. Almost 70 bhp @ 8,500 rpm, the bike weighed 380 lb and had a top speed of 152mph. The high point of the Rocket 3 Road Racer took place in 1971 at Mallory Park when John Cooper beat world champion Giacomo Agostini aboard his MV Agusta. Bike handling was superb with the Rob North frame used on both the BSA triple and Triumph Trident racers. This example is done in John Cooper colors and was built by Richard Haas.