John Cooper, one of England's most successful and popular motorcycle racers of the late sixties and early seventies, visited Allenmotorsport.com recently. Cooper signed the fairing of the beautiful BSA Rob North triple, an exact replica of the motorcycle he made famous in victories over the 7 time World Champion, Giacomo Agostini. 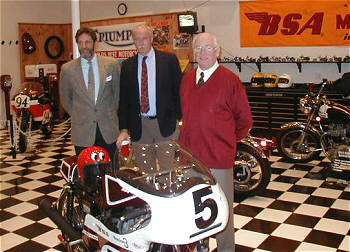 During the 1971 Race of the Year at Mallory Park, fifty thousand motorcycle racing fans crowded into the Leicestershire circuit for what turned out to be greatest race ever run on the UK mainland - John 'Mooneyes' Cooper on the BSA Rocket 3 running against multi-world champion Giacomo Agostini and the all-conquering 500 MV. Spectators shouted themselves hoarse through 30 laps of intense action which ended in a fairy-tale win for the British rider on the British bike.

Cooper delivers his verdict on the clash in Mick Duckworth's marvellous book Triumph and BSA Triples - The Complete Story of the Trident and Rocket Three. He says simply: "I beat Ago because I was prepared to stick my neck out more."


I was at Mallory Park in 1971 and watched John Cooper on his Rocket 3 beat the MV. I owned a 500 Triumph at the time and had a Cromwell crash hat with mooneyes on it. It was a great time of my life, and I still ride bikes to this day. John was the first guy who used to hang his ass off the edge of the bike when cornering. I was born in Derbyshire England very close to John's garage in Derby. Please give John Cooper my best regards, he was the best ride of that day and a good sportsman.
Cheers and God Bless
John Shaw