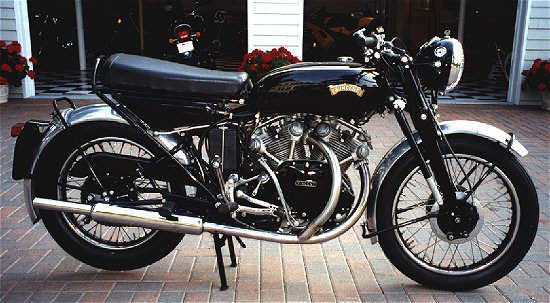 The last of the legendary Black Shadows, the 1955 D series saw Vincent close their doors leaving a legacy of high tech, state-of-the-art, fast and dramatic motorcycles. The Black Shadow, first introduced in 1949, survived through 1955 and along the way broke speed records on several continents. It won an extraordinary following, and many Vincents are still ridden on a daily basis. The Vincent was the first true 100 mph tourer.

The Vincent HRD displays many innovations, some of which are in use to this day - witness the rear suspension. Phil Irving, Australian designer of the Vincent V-twin, went on to design the Formula One V8 engines used in the Repco-Brabham which won the world championships of 1966 and 1967.

The New Vincent - article from The Motor Cycle of December 1945