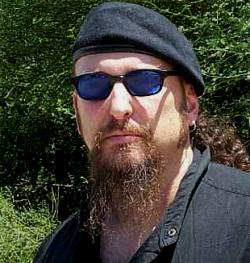 Jeff Seiser of Sedona, Arizona might be the most talented replica bike builder in the world. His work is represented in Allen Museum Collection collection with a spectacular "Captain America" replica and what is no doubt the most spectacular and beautiful "Evel Knievel jump bike replica" in the world!

Jeff only builds two or three motorcycles a year and his work is highly prized in collector circles. Many have seen some of Jeff�s pieces in motorcycles magazines here and abroad and his "non-replica" customs are unique, beautiful and exquisitely detailed. However, it is his replica pieces that are his signature. His "Captain America" bikes are both dramatic and authentic in ALL detail. Using only the finest painters and chromers, Jeff�s attention to detail and his discipline in producing ONLY the most accurate replicas set him apart and allows him to accept ONLY the work he chooses.

Jeff said, " In 1969, I remember seeing to this day my ultimate motorcycle.  The stars and stripes "Captain America".I loved that bike!  I really didn't know anything about welding or bike building, but I raked the neck on my Schwinn and found some old paint cans in the garage and painted it red, white and blue.I put a set of ape hangers on it and built a big motor which consisted of two baseball cards clothes-pinned on the front wheel and four baseball cards on the back.Boy, did I think I was cool!"

At age thirteen, Jeff began to realize that he had both a talent and passion for building motorcycles. He honed his skills building hot rods and custom cars. He taught himself to be a world class welder and fabricator as well as an engine builder.

At sixteen he built his first Harley. "It was a Sportster in the typical 70's chopper look.Back then there weren't all the component catalogues as today so you would grind and cut and weld to make the parts.My friends and I would joke, "You can't bolt on custom."  I would always do a bike from ground up, all the mechanical work, frame work, paint, the whole deal.The enjoyment also lay in hunting down the old parts, many of which have dried up and is more difficult to do.And the satisfaction was in tightening down the last bolt and gazing at what I just created. I always took pride in each individual project and thinking that that was the most important bike in the world. Throughout the years I built many one off customs for my friends for the enjoyment and pleasure of building and creating. Quick Throttle wrote about me for my CV carb modifying kit years back."

From then on Jeff never looked back. His future and career was determined. His work began to attract attention and a broad following. "In 1997, I built an all out supercharged show bike and went the famous Ratshole show in Sturgis, SD and took 1st place in the Nempco Catalogue Show and 2nd place in the Ratshole show.The bike and I were also featured on Speedvision, in Quick Throttle and in magazines in Europe and Japan. I eventually built that "Captain" that I dreamed of as a kid, actually one and it's brother, identical twins you might say, and I am very proud that they are at a place where they are well cared for and appreciated--The Barber Vintage Museum and The Allen Vintage Motorcycle Museum. Thank you Clint and Jeff Ray!"

Allen Museum Collection is proud to feature two Jeff Seiser "classics" in the collection. They remain the highlight of the collection and a testament to the talent and dedication of this world class builder.

More on the Replica...